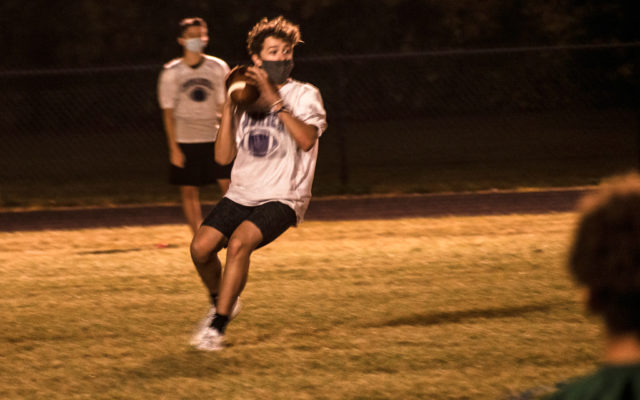 Nina Mahaleris • October 2, 2020
The Old Town Coyotes kicked off their first football game of the season with a 12-7 win over the John Bapst Crusaders at home Tuesday night.

OLD TOWN, Maine — The Old Town Coyotes kicked off their first football game of the season with a 12-7 win over the John Bapst Crusaders at home Tuesday night.

But the team’s season opener looked different this year, as the school attempted to cooperate with the state’s restrictions for play amid the coronavirus pandemic.

For weeks leading up to September, parents and students anxiously awaited a plan from state officials about the upcoming sports season.

The Maine Principals’ Association, working with guidance from a number of state agencies as well as Gov. Janet Mills’ office, announced earlier this month that fall sports could return — with some conditions.

The association’s return-to-play plan approved some sports for the fall including soccer, cross country, field hockey and golf, but postponed tackle football and volleyball until next year.

As an alternative to traditional tackle football, the MPA is allowing schools to do 7-on-7 play this year. The change is intended to remove offensive and defensive play and eliminate tackling while maximizing physical distancing between players.

Teams can play a flag football style but may also do one-hand touch focused on the hip area.

Old Town and John Bapst players wore masks when possible both on and off the field during their Tuesday night match and maintained social distance while watching from the sidelines.

The teams played before empty stands at Victory Field, as spectators weren’t allowed in to avoid crowding. A few people stood against the fences at the field’s entrance to watch the game.

Under MPA guidance, schools can have a maximum of 100 attendees at outdoor games — which includes all players, coaches, officials, and spectators. Players can wear face coverings if they choose to but it is not required during vigorous play.

Some traditions made a reappearance Tuesday night, however, like the fall cheerleading squad that rallied the team from afar. While cheerleaders couldn’t rally the in-person crows as they normally would during games, they still performed for an audience through a livestream, Head Coach Nicole Hogan said.

So at first, she wasn’t sure the school would be able to offer fall cheering — an MPA-sponsored sport — during the pandemic, as state officials postponed tackle football and volleyball until 2021.

But the small squad returned to the sidelines Tuesday night — masked and safely distanced from one another.

Hogan said she was glad to hear that the MPA was going to continue sponsoring fall cheering this year. “I believe that we should have opportunities for the kids through this the best we can — safely.” 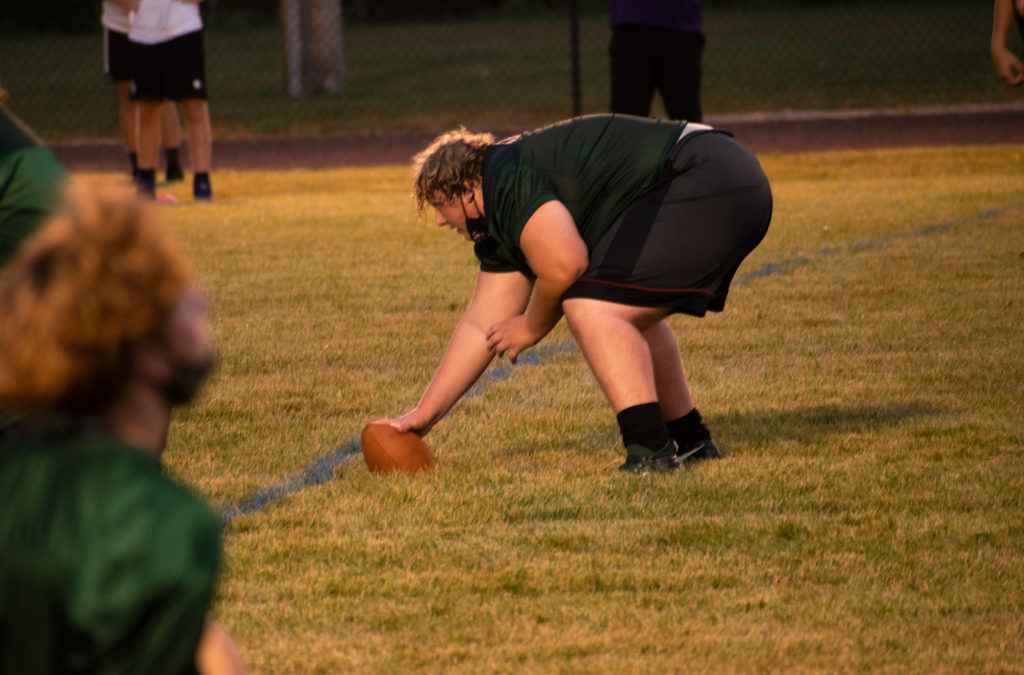 An Old Town player prepares to hike the football during the season opener against John Bapst on Tuesday night. (Nina Mahaleris | Penobscot Times). 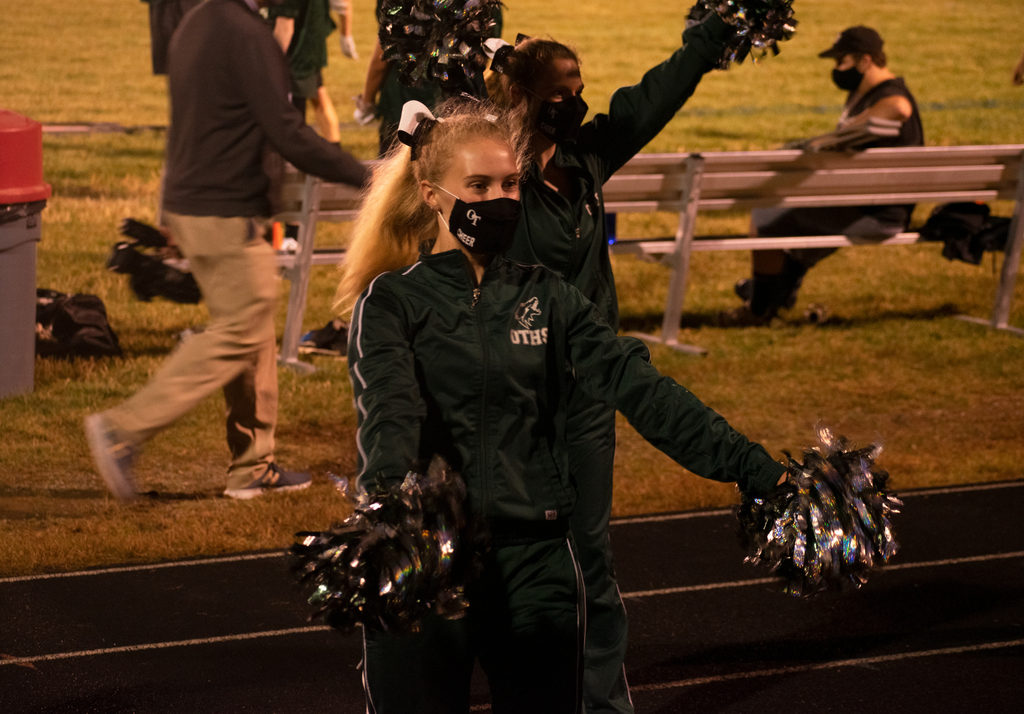 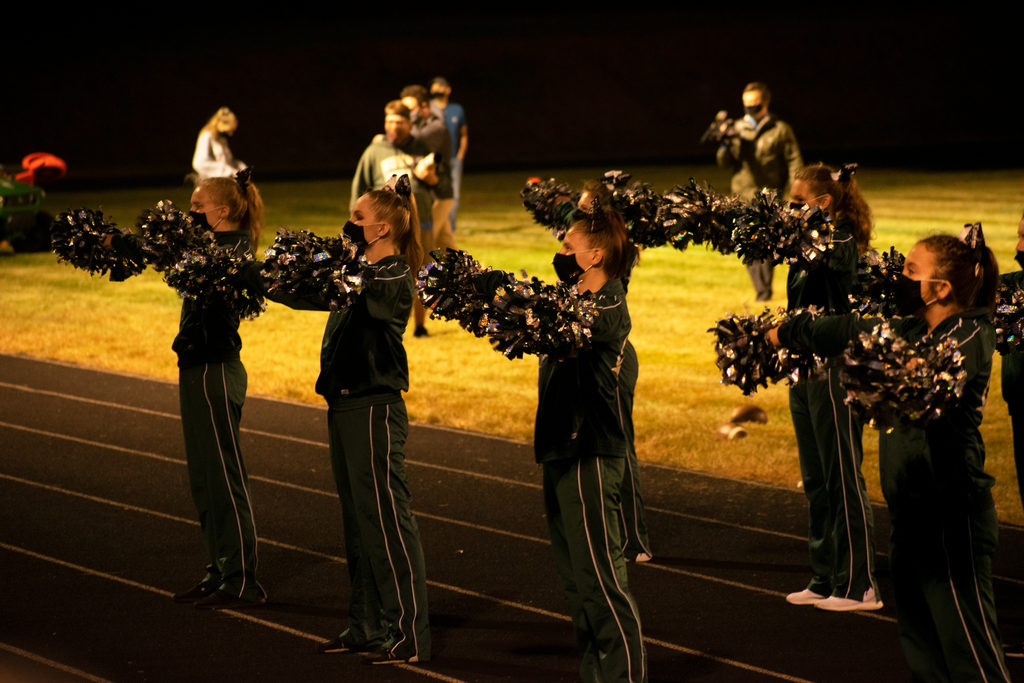