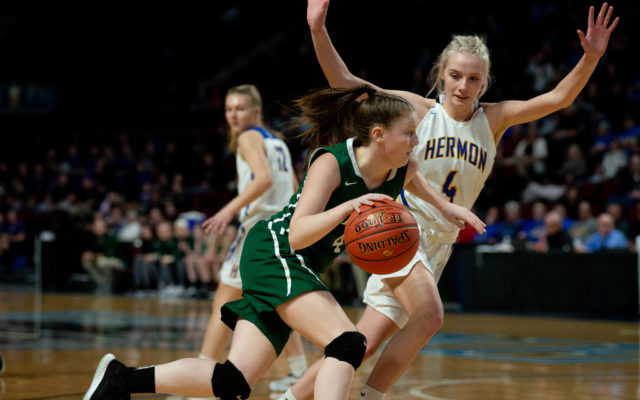 Pete Warner, BDN staff • February 19, 2020
The top-seeded Hawks succeeded in that goal, preventing Old Town’s guard trio from getting easy shots. The result was a 47-34 victory at the Cross Insurance Center in Bangor.

Hermon’s focus was simple during Wednesday’s Class B North semifinal against Old Town: Slow down the Coyotes’ top scoring threats.

The top-seeded Hawks succeeded in that goal, preventing Old Town’s guard trio from getting easy shots. The result was a 47-34 victory at the Cross Insurance Center in Bangor.

Coach Chris Cameron’s Hawks (19-1), who beat the Coyotes for the third time this season, take on No. 2 Waterville in Saturday’s 2 p.m. title contest in Bangor.

The Coyotes closed out the season with a 14-6 record.

Hermon focused on stopping guards Hannah Richards, Lexi Thibodeau and Maddie Emerson, who combined for 20 points on 7-for-32 shooting.

“I think it just came down to not allowing players to get shots where they wanted to. We were fortunate enough to come out on top with our defense.”

The Hawks also took advantage of their superior frontcourt size, mostly in terms of their interior defense and rebounding. Megan Tracy finished with 11 points and six rebounds and Grace Page grabbed eight boards with two points.

“She’s a leader for us on both sides of the ball,” Cameron said.

Thibodeau was the catalyst for Old Town with nine points and four rebounds and Richards tallied seven points, while Claudia Damboise came up with five rebounds and two points.

The Hawks outrebounded the Coyotes 38-27.

“We were motivated. It’s tourney time and we wanted to get past semis, Plissey said.

“We really wanted to keep [Richards] and [Emerson] under 30 points and we knew we’d win the game. That was our main goal.”

Hermon established itself by manufacturing a 13-2 first-quarter lead. That stretch featured scoring contributions from five different players, including a 3-pointer and a rebound basket by Caron that gave the Hawks a 13-2 edge with 1:51 left in the quarter.

Old Town fought back to within three points at 15-12, but Hermon ended the first half on a 9-0 run to take regain control.

Plissey said the young Hawks are overcoming some jitters in the tourney setting.

“A lot of them were nervous and it makes sense because they’re sophomores,” she said. “I think they just had to get out that nervousness and get into the groove of the game.”