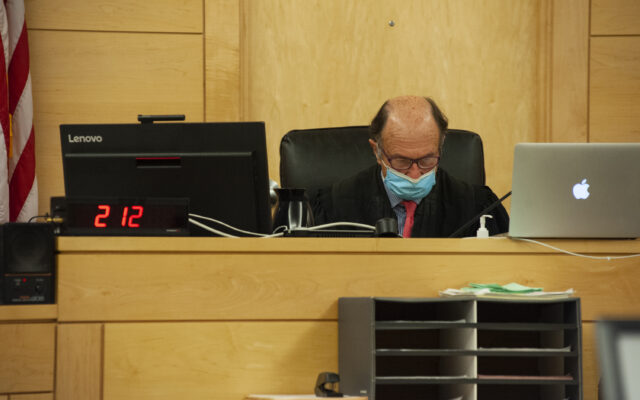 Sawyer Loftus • July 16, 2021
An Old Town man who engaged police in a nearly 20-hour standoff in June will remain behind bars after a judge ruled on Friday he was too dangerous to be let out.

OLD TOWN, Maine — An Old Town man who engaged police in a nearly 20-hour standoff in June will remain behind bars after a judge ruled on Friday he was too dangerous to be let out.

Thadius Wind, 47, was initially arrested June 14 and charged with criminal threatening, terrorizing with a dangerous weapon and violating conditions of release after the standoff. Initially, he was being held at Penobscot County Jail on $30,000 cash bail.

But Wind was released on $1,000 unsecured bail June 25, after he was attacked by a fellow inmate and needed emergency surgery.

Assistant District Attorney Joanne Lewis asked Superior Court Justice William Anderson to revoke Wind’s bail on previous counts and set a new bail at $5,000 cash for the most recent charge of possession of a firearm by a prohibited person.

Wind was taken into custody Thursday morning by Maine State Police, after his girlfriend Patricia Montgomery informed them that Wind was in possession of a .22-caliber handgun in his “apocalypse go-bag,” Lewis said Friday.

Lewis also told the court that Wind is wanted in Ohio for a 2018 failure to appear charge and is listed there as “armed and dangerous with violent tendencies.”

Prosecutors said during Wind’s initial court appearance in June that he may have been suffering from religious delusions during the 20-hour standoff last month.

The standoff started after Old Town Police officers arrived at Wind’s Old Town apartment on Stillwater Avenue. Police said that Wind was waving a sword and yelling at them from his window, according to court documents.

Three days into Wind’s stay at the county jail, he was attacked by another inmate and severely injured, then rushed to Maine Medical Center in Portland. Once he was returned to the Penobscot County Jail, he was held in isolation for his protection.

When Wind was released from jail June 25, part of his release conditions were that he may not possess any dangerous weapons.

Anderson said he typically does not like to hold people behind bars that are suffering from mental illness, but in this case, it’s not a possibility to let him out.

“I don’t like to keep people suffering from mental illness in jail,” he said. “This is just too dangerous a situation.”