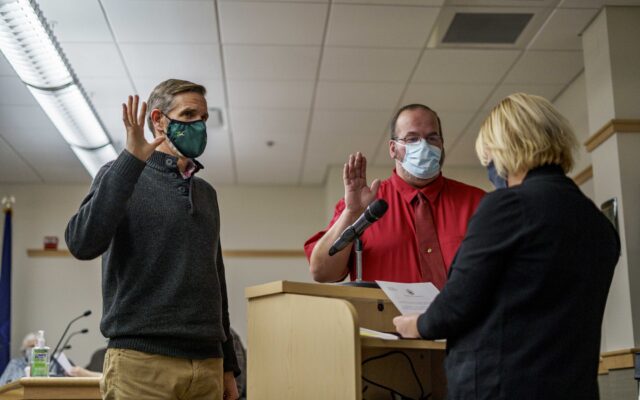 Sawyer Loftus • December 23, 2021
Old Town swore in two new councilors and promoted the City Council’s vice president to president on Monday, marking the end of an unusual election cycle for the city.

Old Town swore in two new councilors and promoted the City Council’s vice president to president on Monday, marking the end of an unusual election cycle for the city.

The swearing-in of the council’s two newcomers came after voters encountered a blank ballot because no one filed paperwork in time to be an official candidate for the two vacancies. The two seats were held by Kyle Smart, the council president, and Councilor Shirley Brissette, but both decided against seeking reelection.

With no candidates on the ballot, the election became a contest among at least a half dozen write-in candidates who emerged after news broke that no resident had filed to run.

Michael May and Chris Pushor were sworn in at the start of Monday’s meeting as the two new councilors. The council selected Tim Folster, who was vice president, to lead the council. Linda McLeod will serve as the body’s vice president.

May is a history teacher at Old Town High School and was the top vote-getter with 336 votes. Pushor, a senior revenue analyst for a medical billing company, received 186 votes on Election Day. 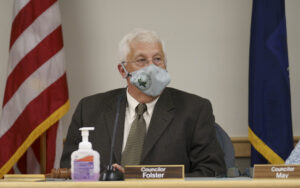 The newly elected Old Town City Council president, Tim Folster, sits at the center of the council after being elected on Dec. 6, 2021. (Sawyer Loftus | BDN)

The new council president, Folster, was elected to the body in 2019. He is from Old Town and attended Old Town High School before getting his bachelor’s degree in mechanical engineering from MIT.

Folster ran for the Old Town City Council following a fire that tore through part of the city’s downtown in September 2019. When running for the council, he told the BDN one of his goals was to help modernize downtown buildings and make them more accessible by adding elevators.

Following the demolition of the buildings most heavily damaged by the downtown fire, Folster said in 2019 he wanted to see something that will bring the downtown “back to life.”

In Folster’s time on the council, the downtown area has started to recover.

While there’s still a hole in the section of downtown that the 2019 fire hit, new businesses have come to the area, gradually adding some vitality.

Just recently, Kosta’s restaurant opened in one of the spots left vacant after the fire. The opening marked a homecoming of sorts for the restaurant that began in the same spot before moving to Brewer.

Additionally, plans are in the works for a new restaurant in the location that was most recently home to the Boomhouse. The new restaurant, Pepper’s Landing, will be the third in a chain owned in part by a man born and raised in Old Town.

Folster has one year left on his three-year term. 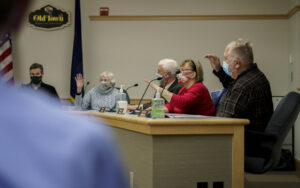