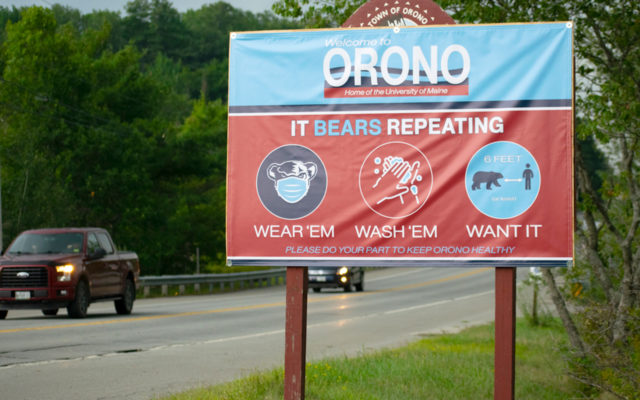 Nina Mahaleris • August 28, 2020
A new town ordinance requires people in Orono to wear a mask while inside public spaces as the town faces a population surge with the return of the University of Maine community.

ORONO, Maine — A new town ordinance requires people in Orono to wear a mask while inside public spaces as the town faces a population surge with the return of the University of Maine community.

The emergency ordinance, passed by the town council on Wednesday evening following a virtual public hearing, also requires that people wear a mask outside while interacting closely with others — such as when picking up or delivering food, providing or using public transportation, or when participating in permitted gatherings.

Public businesses are required to ensure that employees wear masks at all times while having face-to-face interactions with customers, as well.

Under this ordinance, owners of residential housing complexes with 100 or more units are also expected to provide the town with a COVID-19 prevention plan that includes details on how they would address confirmed or suspected cases in their communities.

The council considered four different interpretations of the emergency ordinance during the two-hour meeting, each with unique stipulations about public mask-wearing, before voting on the measure.

All councilors but one, Laurie Osher, passed the ordinance, which took effect immediately following approval.

Councilors have discussed the need for the emergency ordinance at length recently, paying careful attention not to cross the line between protecting public health and infringing on peoples’ personal freedoms with a mandatory mask policy.

To enforce the new ordinance, the town will first give a warning, then issue fines between $100 and $500 to those found in violation. Residential housing complexes could face a $1,000 fine per day if they don’t submit written contingency plans to the town, or fail to implement or enforce those plans in their own communities.

The town has maintained this is not an attempt to collect money from residents and can be interpreted similarly to a code enforcement measure. The ordinance’s goal is to find “voluntary compliance,” Town Manager Sophie Wilson said during Wednesday’s public hearing.

Every ordinance in the town’s code has an enforcement and penalty section, Wilson said.

“There are fines associated with all of them. We only fine people for those penalties that are absolute priorities. Our hope is that we wouldn’t need to go down that road [in this matter],” she said.

Councilor Osher, who voted against the ordinance, said that the council and town want to be educational rather than punitive, and suggested residents could form a town-wide health committee for public education, in lieu of approving the formal ordinance.

Public sentiment varied at the session. Some residents voiced support of the ordinance as a crucial step in preventing an outbreak, while others argued it was unwarranted and an overreach of the municipality’s authority, as the town had maintained a relatively low infection rate through the summer.

Up until last week, Orono had recorded just six confirmed cases of COVID-19.

But as the start of UMaine’s fall semester grew closer, some residents and students shared worries of the town becoming a coronavirus hotspot.

The Town of Orono and the University of Maine System have been working together closely in recent weeks, in an attempt to raise public awareness of the spread of coronavirus.

Just days before the university kicked off its annual move-in week tradition, three students had tested positive for COVID-19. A fourth student tested positive as of Tuesday. The school has also suspended one student and disciplined seven others for not following physical distancing rules at a party, the university said.

The town has used about $75,000 in state and federal funding — some of which came from Gov. Janet Mills’ KeepMEHealthy plan — to help educate the public on COVID-19 prevention. It’s also partnering with a Maine company to design an application to encourage students to engage in safe hygiene practices, Wilson said.

The town expects to hold a virtual public meeting with the City of Old Town and UMaine officials to discuss the coronavirus at 5:30 p.m., Wednesday, Sept. 2.