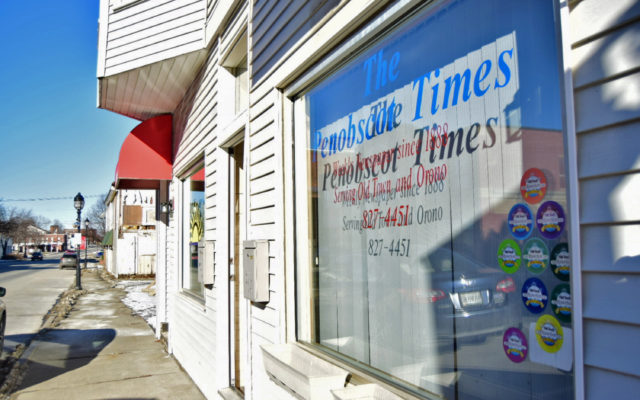 Nina Mahaleris • December 29, 2020
OLD TOWN, Maine — The Penobscot Times will close its office at 282 Main St. in Old Town and move its operations to Bangor at the beginning of 2021.

OLD TOWN, Maine — The Penobscot Times will close its office at 282 Main St. in Old Town and move its operations to Bangor at the beginning of 2021.

Bangor Publishing Co., which runs the Bangor Daily News as well as several other weekly papers across Maine, acquired the Penobscot Times from Sun Media Group in September 2019.

The company announced the office closure in a note to readers in the Dec. 24 edition of The Penobscot Times.

“The move to its publisher’s headquarters and resulting efficiencies will help ensure the continued operation of the paper. The Penobscot Times will continue to serve readers and advertisers in the Old Town-Orono area as well as those in several other communities in the region,” the notice said.

The paper’s day-to-day operations will take place at the company’s headquarters at One Merchants Plaza in Bangor.

The office’s closure marks the end of its long-time physical presence in downtown Old Town.

The Penobscot Times was founded in 1888 and spent much of its early days during the 20th century under the co-ownership of John McKernan, a former BDN sports editor. He purchased the weekly with Joseph Sewall in 1948 and ran it until his death in 1964.

The paper previously operated from an office on Wood Street before moving downtown in 2002, Penobscot Times advertising representative Lynn Higgins said. It spent the next five years at 268 Main St. — formerly known as Yamas Bar and Grill — before establishing itself at the 282 Main St. location.

News of the office’s closure also comes as the city attempts to revitalize its economic center in the wake of a 2019 fire.

“We hate to see any business leave downtown because we’re already working to fill some vacant spaces,” E.J. Roach, the city’s director of economic and community development, said. “[But] we’re glad to see that the publication will continue because we know that the news from this community is important.”

Bangor Publishing Co. said it will donate bound archives of The Penobscot Times and other publications dating back to 1912, along with artifacts from the office, to the Old Town Museum.