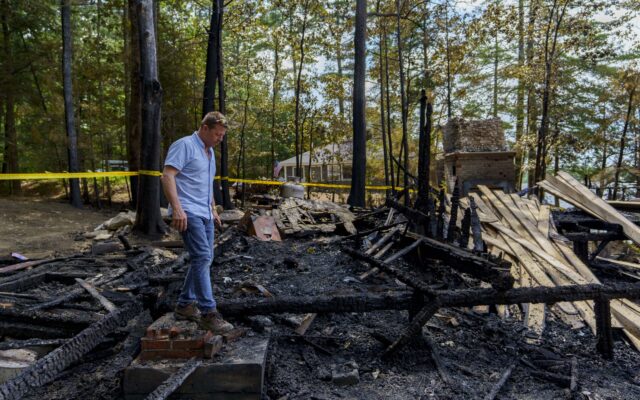 Sawyer Loftus • July 1, 2021
A camp that has stood on the shores of Pushaw Lake since 1935 burned to the ground early Wednesday morning, according to the Orono Fire Department.

ORONO, Maine — A camp that has stood on the shores of Pushaw Lake since 1935 burned to the ground early Wednesday morning, according to the Orono Fire Department.

A call came into the department just after midnight about a camp that was on fire on Gould Road, Fire Chief Geoffrey Low said Wednesday. The building was engulfed in flames when crews arrived, he said.

Brian and Lois Adams of Glenburn own the camp, and had spent the last five months working on restoring it, Brian Adams said. They were just days away from being able to stay inside the remodeled building.

“It makes me nervous about living anywhere. How could this happen? It doesn’t make any sense,” he said. “I don’t understand what happened here and we’d like to know — and that’s the scary part, there’s no explanation.”

Chief Low said the building was a total loss and there was an estimated $100,000 worth of damage.

For the couple, the loss of the building isn’t just a financial loss, it’s something deeper than that, Brian Adams.

“This thing has been here forever and that’s the saddest thing,” he said. “It’s been here since 1935 and we were doing so much to make it something people would have been proud of and I just feel so bad it’s gone — I feel like I failed.”

The cause of the fire was still under investigation by the state fire marshal, but it didn’t look suspicious, Low said Wednesday morning.

Brian Adams said they had gutted the building and were doing much of the restoration work themselves, but that he and his wife didn’t cut corners when it came to safety.

“I just don’t understand it. We did everything — code enforcement, inspections, the electrical was completely redone,” he said. “There was every safety precaution, smoke detectors, everything hooked up. It wasn’t like a cheap old camp. We dumped a ton of money into this thing. We didn’t skimp when it came to safety precautions.”

The one silver lining was that no one was inside or hurt, just a bunch of lost material items and months of hard work, he said.

The thing left behind was the original 1935 fireplace that remained upright, rising from a pile of ash and rubble.

Crews were at the camp for several hours and focused on preventing the spread of the fire. One firefighter was evaluated for injury, Low said.