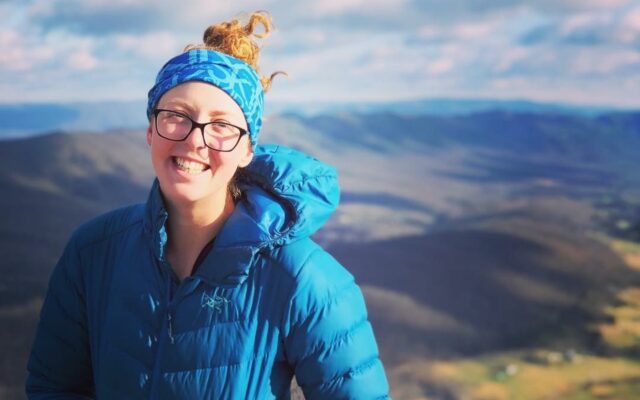 Contributed News • April 9, 2021
When Madeleine “Madi” Landrum hiked the Appalachian and Pacific Crest trails in 2018, she saw thousands of acres of trees devastated by drought-induced wildfires and invasive pests.

ORONO, Maine — When Madeleine “Madi” Landrum hiked the Appalachian and Pacific Crest trails in 2018, she saw thousands of acres of trees devastated by drought-induced wildfires and invasive pests.

“Seeing how damaged the forests were in these gorgeous natural places, I felt that I needed to do something,” the University of Maine ecology and environmental sciences Ph.D. student said.

For Landrum, that includes reconstructing local fire and pollen records to better understand how Wabanaki people used low-intensity fire as an agricultural and forest management tool.

She’ll be reaching out to Penobscot and Passamaquoddy tribes to share in the collaborative project, which could yield additional evidence of long-term indigenous habitation and food production in areas throughout what’s now called Maine. Reintroducing those practices also would clear underbrush which fuels uncontrolled fires, as well as reduce the tick population that’s negatively affecting the health of people and moose, she said.

Recently, Landrum was awarded a National Science Foundation Graduate Research Fellowship for her proposal to reconstruct this prehistory. The three-year fellowship includes an annual stipend, tuition and professional development opportunities.

As the project takes shape, rising temperatures and drought are fueling an increase in the frequency and intensity of forest fires in the Northeast. Landrum said that  900 fires were recorded in Maine last summer. Drought-induced fires endanger logging and tourism, both of which are important to the economy.

Landrum hopes to collect sediment cores from small ponds and forest hollows in sites with Penobscot and Passamaquoddy place names and oral histories —  including Mount Desert Island, which is an historical hunting ground; Schoodic Peninsula, which translates to “the burnt place” in the Passamaquoddy language; and the Hirundo Site, which is the longest inhabited archaeological site in the area.

One sediment test will be for the presence of pollen types associated with agriculture, which will help indicate whether fire was used to clear land for crops. Landrum will synthesize her findings with existing archaeological, climate and pollen records to assess relationships between population and cultural shifts, climate, vegetation, and fire histories from the local to regional scales.

Since earning her undergraduate degree in environmental biology from Cazenovia College in New York, Landrum has worked in Colorado with the Southwest Conservation Corps, in North Carolina at a plant nursery and at the Highlands Biological Foundation and Station, and in New York at a wilderness survival camp.

She chose UMaine because of its strong interdisciplinary EES program and because she’d be advised by Jacquelyn Gill, associate professor of paleoecology and plant ecology.

“She’s the kind of mentor I want to learn from,” Landrum said. “She makes a positive impact by studying the past.”

Gill said that people have been in Maine from the moment the glaciers melted here, more than 13,000 years ago. “The prehistoric perspective is valuable for conservation and management but, too often, the people in those ecosystems are an afterthought, or are left out of the picture entirely,” she said. “Madeleine’s research will help us to weave a much richer, more complete tapestry about the history of our forests, and we’re excited to work with Wabanaki peoples to tell those stories.”