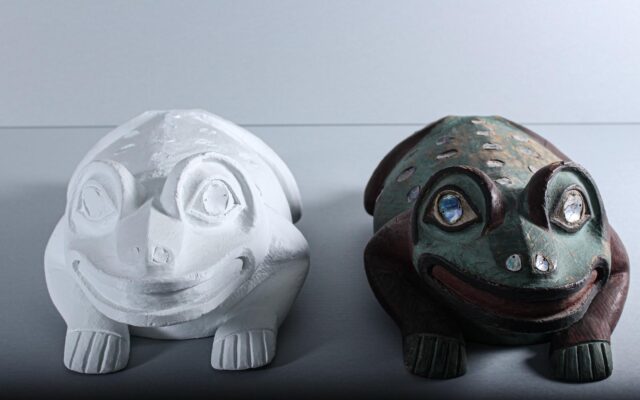 Sawyer Loftus • May 20, 2022
A new project at the University of Maine is bringing engineers, artists and a campus museum together to return culturally sensitive artifacts to an Alaska tribe that wants the items returned.

A new project at the University of Maine is bringing engineers, artists and a campus museum together to return culturally sensitive artifacts to an Alaska tribe that wants the items returned.

The UMaine team is creating a replica of one artifact using 3D printing, then refining it so a copy of the Tlingit Frog Clan Helmet will be on display at the Hudson Museum after it returns the original to the Tlingit tribe in southern Alaska.

The idea with the first replica is to prove the technology can work and be used more broadly. If all goes as planned, UMaine will create replicas of about a half dozen other Tlingit artifacts the tribe has requested.

“We work very closely with Native American communities, and these objects are integral to their cultural practices,” Hudson Museum Director Gretchen Faulkner said. “So it’s reconnecting these communities with their cultural traditions and cultural objects made by their ancestors.”

The project started after the Tlingit tribe’s central council filed a request for repatriation of the helmet and seven other objects the Hudson Museum has in its collection, Faulkner said.

Under a 1990 federal law, Native American communities can request certain artifacts taken from their ancestral lands or owners be returned. Faulkner said she worked with the Tlingit to get approval to try to create a 3D-printed replica of the helmet so the museum could return the original but keep a version in Orono.

The helmet is a clan helmet that would have been displayed by the clan leader, Faulkner said. The Tlingit have worked with other museums across the U.S. to secure the return of their artifacts because they are communally owned, she said.

The helmet and other artifacts were donated to the university in 1982 by the estate of William P. Palmer III, who had collected the objects.

Two research engineers at UMaine’s Advanced Structures and Composites Center, Alex Cole and Jonathan Roy, took up the task of figuring out how to use 3D-printing to create the replica. Typically, the pair are using 3D-printing technology to create final products with clean lines and edges.

“This is the opposite,” Cole said. “We took this scan and cleaned it up, and just sent it to the printer because we wanted to match it exactly and have all of its little flaws and details.”

Cole and Roy have made other cultural objects, like a copy of the University of Maine’s Presidential Medallion and a bicentennial time capsule for the Maine State Library. But this project took hours of work and forced them to brainstorm new methods, Cole said.

“Generally what we have used this process for in the past is to find objects that were conventionally made with conventional materials, and then see what we can make in-house with more complex materials,” Cole said. “But this is different because we’re just trying to make an older object in a new way.”

The project isn’t part of the students’ coursework, she said.

By the end of July, the Hudson Museum will have a temporary exhibit showing how the team took the original artifact and created the replica, Faulkner said.

After that, the museum will return the helmet to the Tlingit and, hopefully, start work on creating replicas of the other artifacts, she said.

“The return of these objects has brought healing to their communities and reconnected them to their past,” Faulker said.