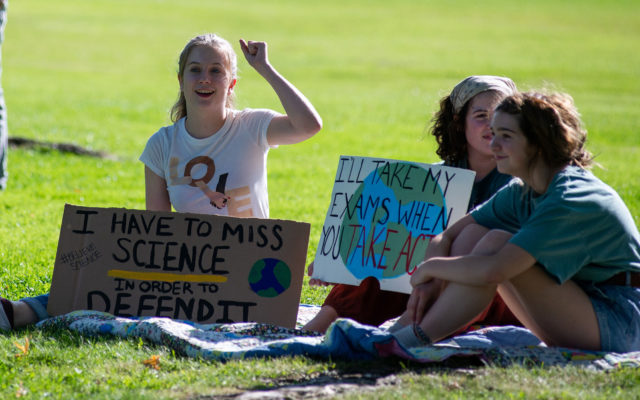 UMaine scientists find trees are out of equilibrium with climate, posing new challenges in a warming world

Paula Brewer • December 15, 2020
ORONO, Maine — Scientists at the University of Maine have discovered that North American trees and shrubbery are growing out of equilibrium with the changing climate in a recent research study.  There is a growing interest among climate change researchers in assessing whether trees and other species can keep pace with changing temperatures and rainfall, shifting where they are found, also known as their ranges, to track their suitable climates.

ORONO, Maine — Scientists at the University of Maine have discovered that North American trees and shrubbery are growing out of equilibrium with the changing climate in a recent research study.

There is a growing interest among climate change researchers in assessing whether trees and other species can keep pace with changing temperatures and rainfall, shifting where they are found, also known as their ranges, to track their suitable climates.

The study was spearheaded by Benjamin Seliger, a former UMaine Ph.D. student with the Climate Change Institute along with his doctoral adviser, Jacquelyn Gill, a UMaine associate professor of paleoecology and plant ecology.

Brain McGill, a UMaine professor of biological sciences, and Jens-Christian Svenning, a macroecologist and biogeographer from Aarhus University in Denmark, also contributed.

The team studied the current ranges of hundreds of North American trees and shrubs to assess the degree to which species are growing in all of the places that are climatically suitable. Researchers found evidence of widespread “underfilling” of these potential climatic habitats — only 50 percent on average — which could mean that trees already have a disadvantage as the world continues to warm.

The team used species distribution models to assess the degree to which 447 North American trees and shrubs “fill” their potential climatic ranges by comparing regions that are climatically suitable, known as potential ranges, against where trees are actually found, or their realized ranges.

Seliger — who is now a postdoctoral researcher at the Center of Geospatial Analytics at North Carolina State University — and his co-authors discovered a significant difference between where the trees they studied could grow, and where they actually grow, also known as range filling.

The average range filling value across all 447 species equalled 48.6 percent, indicating that on average, trees are not found in about half of the areas that are climatically suitable for them, according to researchers.

Species distribution models are a common tool to predict how climate change will affect biodiversity and the future ranges of plants and animals. Various studies, including the one from the UMaine-led group, however, caution that because this tool assumes that species live in all areas that are climatically suitable, known as experiencing climatic equilibrium, it may not provide an accurate prediction of where species will be found in the future.

A species distribution model relies on what has been considered a foundational principle, “that geographic ranges generally appear to be in equilibrium with contemporary climate,” according to researchers. Growing evidence suggests otherwise for many species, which experience climatic disequilibrium.

Seliger and his team found that North American trees and shrubs with large ranges tended to show much stronger evidence of climatic equilibrium, meaning they had high range filling.

Small-ranged species, however, had much lower range filling overall, performing worse than predicted by a null model. According to researchers, that means small-ranged tree species, including many rare trees and species the International Union for the Conservation of Nature lists as vulnerable, will face additional challenges as they try to track their climates into the future.

The group also found that small-rage species may be more limited by non-climatic influences, such as soils or pathogens. Conservation efforts for these plants and animals, therefore, should “account for a complex interplay of factors in addition to climate when preparing for the next century of global change,” according to researchers.

The disequilibrium could be due to two factors, according to researchers: dispersal lags that date back to the time when glaciers covered large portions of North America 21,000 years ago, or by non-climatic factors that may influence ranges more than previously appreciated, such as soil, competition with other plants, or symbiosis.

“It’s been thought that if you zoom out to the scale of North America, climate was the most important factor in determining where species would be found. This study reveals some striking gaps in our knowledge; even at the scale of an entire continent, soils or other plants and animals may be playing an important role too. We used to think those were more important at the more local scale — think of how the trees might change across two areas of your favorite park,” Gill said.

“All of this means that when it comes to plants, our predictive tools need to get a lot more sophisticated, if they’re going to be useful for conservation.”