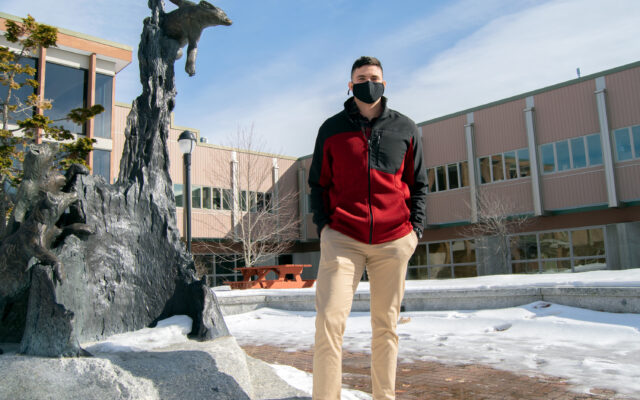 Nina Mahaleris • March 6, 2021
A 22-year-old student at the University of Maine received a courageous citizen award from the Orono Police Department this week for his lifesaving actions after stopping a moving car with an unconscious driver inside earlier this winter.

ORONO, Maine — A 22-year-old student at the University of Maine received a courageous citizen award from the Orono Police Department this week for his lifesaving actions after stopping a moving car with an unconscious driver inside earlier this winter.

December 11 was a cloudy but dry afternoon and Joseph Cali was on his way to the post office to return a textbook on the last day of the fall semester.

It was a routine errand, but what Cali encountered while driving down Bennoch Road that day was far from ordinary — and would later cast him as a town hero.

Bennoch Road, or Route 16, stretches between LaGrange and Orono, encompassing Alton and Old Town. Depending on where you start, it’s a straight shot to downtown.

Cali was around Riverside Cemetery, not far from the post office at the end of the road, when he noticed a car ahead was driving unusually slow. “It seemed like it was going five miles an hour,” Cali said.

Other cars ahead moved around the car, so Cali did, too. But when he sped ahead and looked out his window, he noticed the driver was passed out in his seat.

Cali said he didn’t really stop to think about what was going on, he just acted. He quickly passed the car and parked on the side of the road.

Behind him, the other car was still rolling down the street with the unconscious driver locked inside. He ran to the vehicle and started knocking on the glass to wake the driver up — but it didn’t work.

Cali could see the car approaching his own and thought he needed to figure out something quickly. He moved his vehicle ahead again, grabbed a tool he had laying around inside and ran back to the moving car.

Quickly, he smashed a back window, reached around to unlock the driver’s side door to gain entrance and hit the brakes. He pulled the car off the road and put it in park. “I wasn’t thinking, I just did it,” Cali said.

But the unconscious driver still didn’t awaken. Cali gestured to a woman who was nearby to call 911 for medical help. “Once I stopped the car and everything calmed down, that’s when a rush of shock and adrenaline hit me,” he said.

Orono Police Officer Chris Gray responded to the 911 call with medical first responders, who got the driver into an ambulance and woke him up.

The driver — who is prone to seizures and losing consciousness but has since fully recovered — didn’t remember what had happened. But Cali most likely saved his life and the lives of other drivers or pedestrians on Bennoch Road that afternoon, Gray said. 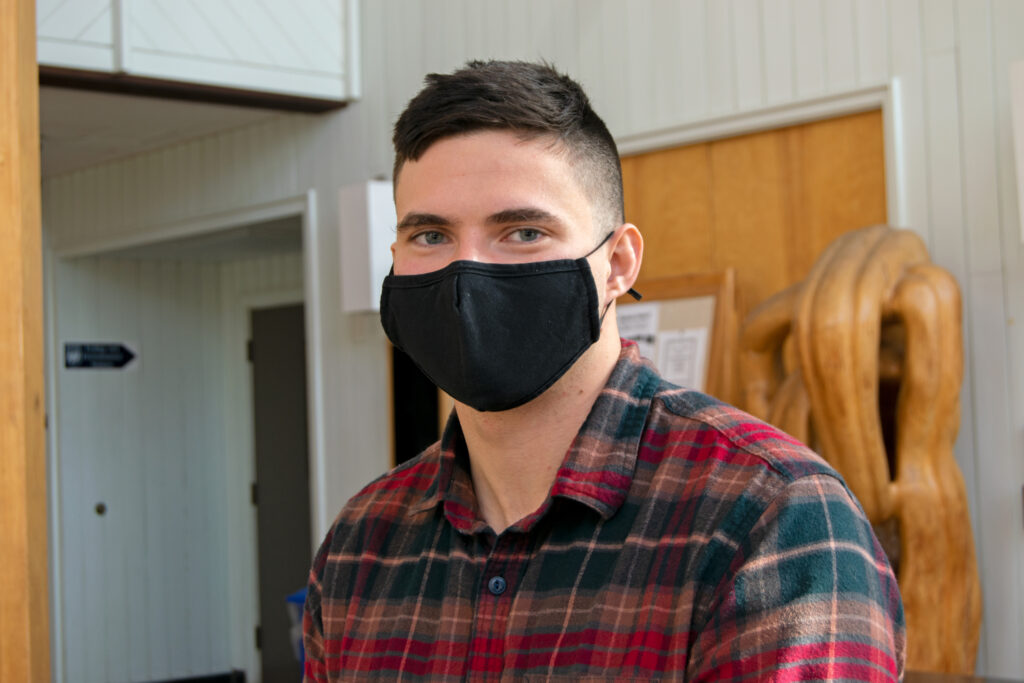 Joseph Cali, 22, stands for a photo inside Nutting Hall at the University of Maine. Cali is being heralded a hero for stopping a moving car after the driver passed out at the wheel. (Nina Mahaleris / The Penobscot Times)

Orono Police Department recognized Cali with a Courageous Citizens award on Wednesday. “I wanted to make sure that he was recognized for his actions,” Gray said.

“I don’t think a lot of people would’ve had the instinct to jump into action that quickly,” he said.

When the police department relayed the story on Facebook Friday morning, people quickly heralded Cali as a hero. While he was grateful for the positive messages, he said first responders do these lifesaving actions everyday and don’t often get the recognition they deserve.

“I know a lot of people that would’ve done the same exact thing in my position,” he said. “There’s plenty of heroes out there that don’t get recognized.”

Cali anticipates to graduate from UMaine this May and plans to join the U.S. army as an infantry officer.