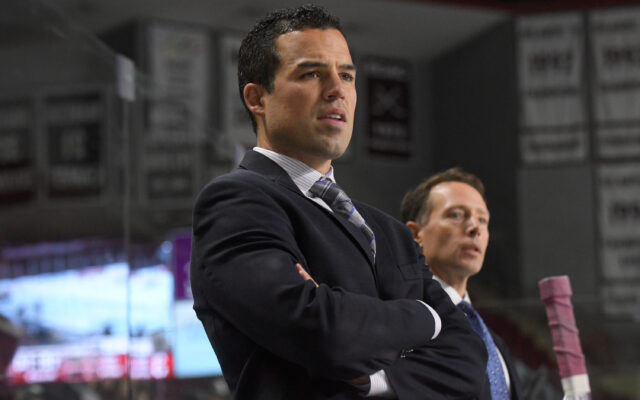 Larry Mahoney • May 14, 2021
Coaching peers of Ben Barr, who was introduced Wednesday as the head men’s ice hockey coach at the University of Maine, said the program will be in good hands under his guidance.

ORONO, Maine — Coaching peers of Ben Barr, who was introduced Wednesday as the head men’s ice hockey coach at the University of Maine, said the program will be in good hands under his guidance.

The native of Faribault, Minnesota, had been the associate head coach and recruiting coordinator at UMass for five seasons. He helped the Minutemen claim their first NCAA championship this season after losing in the title game in 2019.

“He has helped put together multiple championship teams at the Division I level and I’m excited to see him get the opportunity to serve as a head coach,” he said. “Ben has found success due to his work ethic and knowledge of the game, but what sets him apart is that he is a high quality individual. I will miss working with him on a daily basis.”

Union and Providence won their NCAA titles in 2014 and 2015, respectively, with players he helped recruit and coach.

“He is driven and a tireless worker,” Western Michigan head coach Andy Murray said. “He is an aggressive, aggressive recruiter who relates well to families and young players.”

Barr and wife Tara have a 3-year-old son Brooks and newborn twins Isla and Griffin.

“He is a good person with great family values,” Murray said.

Former Union College defenseman Shayne Gotisbehere, who has racked up 219 points in 381 games for the National Hockey League’s Philadelphia Flyers, and former UMass defenseman Zac Jones, who has played 10 games for the New York Rangers, are two of Barr’s prize recruits. Both were third-round draft picks.

“He’s a great kid and a really good recruiter. He knows what it takes to be successful at the Division I level,” said Providence head coach Nate Leaman, who hired Barr at Union and at Providence.

Leaman said since Barr will be able to take the best of what he learned from three longtime head coaches — himself, Murray and Carvel — and establish his own style and identity.

Leaman, who pointed to the benefits of Barr’s Hockey East experience, described him as charismatic.

“He will be great in the community and with the media,” he said.

Leaman, a former UMaine assistant, said he absolutely believes UMaine can be what it used to be and that Barr can return the program to prominence. The Black Bears haven’t reached the NCAA Tournament, or even the Hockey East semifinals, since 2012.

“He is an honest guy who tells you like it is and that’s what we loved about him,” said UMass assistant captain Bobby Trivigno. “Every day, he pushed us to be better and was a big reason for all of the success our teams had. I know he will do a great job at Maine.”

Barr worked closely with the UMass defensemen, including Hobey Baker Award winner and NHL Rookie of the Year Cale Makar of the Colorado Avalanche.

Jim Montgomery, UMaine’s all-time leading scorer who is an assistant coach with the NHL’s St. Louis Blues, was part of the six-member UMaine search committee.

“He has shown the ability to recruit national championship teams in Hockey East while working with a vast number of great coaches,” said Montgomery, who as a player led UMaine to the first of its two NCAA titles during 1992-93.

“I believe a key reason he has had remarkable success recruiting is that he has an amazing ability to convey sincerity,” said Major, who played on UMaine’s first NCAA Tournament and Frozen Four teams. “You talk to him and trust him. He has been able to convince players, parents and advisors that they should put their athletic future in his program’s hands and he has done it everywhere he has gone.

“I believe he will do the same thing for the University of Maine,” he said.