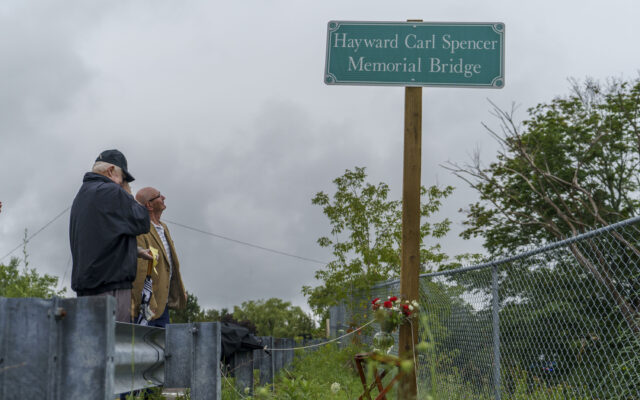 Sawyer Loftus • July 20, 2021
After more than 50 years, the only Veazie resident who was killed during the Vietnam War got the recognition his family said he has deserved for half a century.

VEAZIE, Maine — After more than 50 years, the only Veazie resident who was killed during the Vietnam War got the recognition his family said he has deserved for half a century.

Hayward Carl Spencer was a Veazie person through and through, born in Veazie and laid to rest in Veazie. He was killed in action during his second tour of duty in Vietnam on March 11, 1967.

On Monday, town officials, family members, friends and community members unveiled the new plaques dedicating the town’s bridge on Main Street to Spencer, in honor of his service and sacrifice. 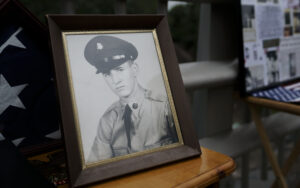 Town Manager Mark Leonard said conversations had been in the works for the last two years to change the name of the bridge. The action required a piece of legislation sponsored by Veazie’s state Rep. Peter Lyford, passed in March of this year.

Spencer was born in 1943 and died at the age of 23 in Vietnam while he was serving with the Special Forces as a medical adviser to a South Vietnamese Army unit.

At first, the Army didn’t necessarily want Spencer when he went to enlist in 1962. He was 5 feet 4 inches tall and weighed 100 pounds — making him at the very least too light for Army physical standards.

His friends said he ate bananas and cream to bulk up before he officially joined up in May 1962, Leonard said at the bridge dedication ceremony Monday. 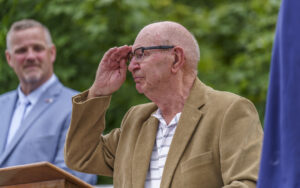 Donald Spencer gives a salute to audience members after sharing a few words about his brother Hayward, the only Veazie resident who was killed during the Vietnam war, during a ceremony dedicating a bridge to Hayward in Veazie July 19, 2021. (Sawyer Loftus | The Penobscot Times)

Spencer was a medic and then in 1966 he passed jump school to become a paratrooper for the Army.

Childhood friend Frank Jordan of Veazie told the gathered crowd that Spencer was a good friend to him. Spencer even told Jordan before he enlisted not to volunteer for the Vietnam War, he said.

“Hayward will always be my hero, alright?” Jordan said. “He was a hero over there.” 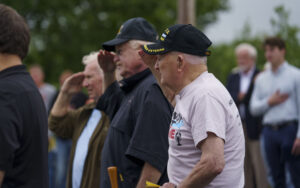 Veterans salute the American Flag during the pledge of allegiance given at the start of a bridge dedication in Veazie July 19, 2021. (Sawyer Loftus | The Penobscot Times)

Jordan didn’t take Spencer’s advice. He enlisted and served several tours in Vietnam too, a conflict that changed himself and Spencer, Jordan said.

“Now Hayward came home and got in a little bit of trouble, and people didn’t understand. He had PTSD, as do I,” Jordan said. “I understand now what he went through. He saw all the horrible stuff.”

According to a letter written by one of Spencer’s comrades and sent to his family after he died, Spencer’s unit was attacked by North Vietnamese mortar fire in the early morning hours of March 11, 1967.

Spencer ventured out from cover into the open to help some of his fallen comrades and was killed instantly by a mortar round, the letter said.

“Your son met a hero’s death,” the letter to Spencer’s family read. 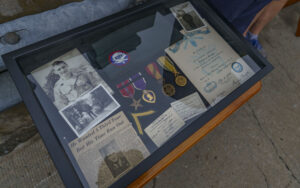 Artifacts that trace Hayward Spencer’s time in the military sit, enclosed in a glass case in Veazie July 19, 2021. (Sawyer Loftus | The Penobscot Times)

Donald Spencer said Monday his brother grew up fearless and was a bit of a troublemaker as a youth. He said the dedication of the bridge marks an important moment for him and the rest of his family.

“It means a hell of a lot really. And I feel really good about giving the Vietnam veterans the recognition they deserve,” he said.

In a letter Hayward Spencer wrote home before his death, he told his family he wanted to stick around.

“I think I’ll sign up for a third tour over here,” Spencer’s letter home said.

Although it took two years of conversations and work to get the bridge renamed, Spencer’s niece, Jill Spencer Milligan, said there are more bridges out there that could be renamed to honor Maine’s heroes.

“I’m going to start talking to my legislators in my area,” she said. “Anyone out there that wants to jump on the cause, let’s do it.” 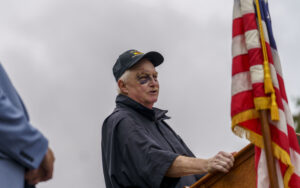 Frank Jordan of Veazie speaks to a gathered crowd during the dedication of the bridge on Main Street as the Hayward Carl Spencer Memorial Bridge, in Veazie July 19, 2021. (Sawyer Loftus | The Penobscot Times) 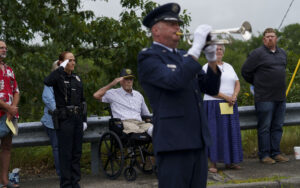 A Veazie Police Officer and a man wearing an Army Veteran hat salute the flag as Colonel John Thomas plays taps, during the dedication of the bridge on Main Street as the Hayward Carl Spencer Memorial Bridge, in Veazie July 19, 2021. (Sawyer Loftus | The Penobscot Times)