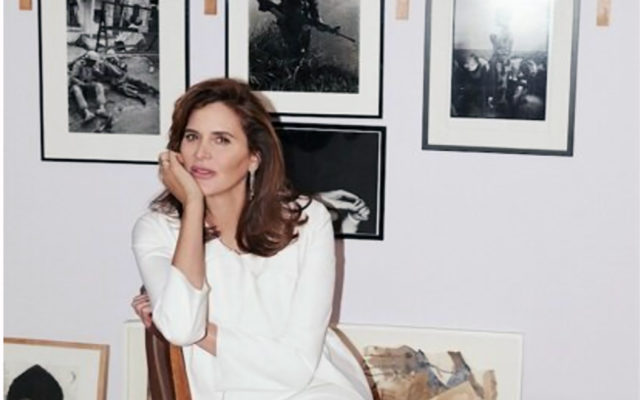 Nina Mahaleris • September 1, 2020
The award -- given out by the university’s Alumni Association -- is named in honor of Dr. Bernard Lown, a 1942 graduate, cardiologist and Nobel Laureate who “devoted his life to world disarmament and the advancement of human health.”

ORONO, Maine — Years before Janine Di Giovanni became internationally renowned for reporting stories from the front lines of battle, she was a young English literature student at the University of Maine.

Di Giovanni hadn’t imagined herself at UMaine becoming a war reporter who would go on to write about some of the most notable wars, genocides and humanitarian crises in world history. She just wanted to be a writer.

But the calling to be a storyteller soon pulled her into a career spanning more than three decades, sharing stories about people whose lives had been forever marked by war.

Now, the school is honoring the award-winning journalist’s commitment to conflict storytelling by making her this year’s recipient of the Bernard Lown Humanitarian Award.

The award — given out by the university’s Alumni Association — is named in honor of Dr. Bernard Lown, a 1942 graduate, cardiologist and Nobel Laureate who “devoted his life to world disarmament and the advancement of human health.”

UMaine was different when Di Giovanni was an undergraduate in the early 1980s, she explained. It was a big place — one you easily got lost in, she recollected. The teachers weren’t as willing to take students under their wings like today, and didn’t offer much encouragement.

“I had no idea what to do … I really didn’t have much guidance or direction,” said Di Giovanni, remembering the feeling of uncertainty as she searched for a purpose. While UMaine hadn’t inspired her intellectually, it did give way to bigger things for the young writer.

Di Giovanni still remembers the people who challenged her to think differently, especially Charles Scontras —  a former political science professor and historian whose research focuses on the Maine labor movement.

His political science courses were “incredibly illuminating,” Di Giovanni said. She still sends him her articles to read from time to time.

She also remembers the ones who weren’t as motivating, like the professor who discouraged her from applying to the Iowa Writers Workshop — a Masters of Fine Arts writing residency — because no one from Maine had been accepted at the time, she said.

“I think that because she was so discouraging, I did [apply],” said Di Giovanni. “Maybe it was the rebelliousness in me… I thought ‘I’ll show you’.”

That determination propelled her on to finish the writing residency, and later on to London, where she came upon a chance to work as a freelance writer. It was then that Di Giovanni grew into her own as a journalist, too, covering the first Palestinian Intifada in the early 1990s.

Through the years, she’s written about the siege of Sarajevo, the Rwandan Genocide, wars in Sierra Leone, Somalia, the Ivory Coast and more. She’s also reported on Iraq, the Arab Spring and Syria.

Di Giovanni’s work has won numerous awards such as the Blake-Dodd Prize for non-fiction writing from the American Academy of Arts and Letters, a Courage in Journalism award from the International Women in Media Foundation, the Amnesty International UK Media Award and others.

Di Giovanni was also made a Guggenheim Fellow last year.

Despite years of sharing stories of global conflicts from the field, Di Giovanni is often reluctant to label herself a reporter.

In war, the ethical lines that separated reporters from humanitarian aid workers became blurred — posing moral dilemmas for reporters who witnessed human atrocities making them question what roles they played in situations with dire outcomes, she once explained.

Amid the ethical uncertainties that challenged storytellers abroad, she remained steadfast in her mission: to document injustice and bring it to the light.

“All I am is a witness. My job, my role, is to bring a voice to people who are voiceless … My ‘metier’ is to bear witness, and that is the crux, the heart of the matter for us reporters who do this,” Di Giovanni said during a Tedx talk she gave in 2012.

Di Giovanni said she doesn’t delude herself into believing that political leaders read her stories and take action to rectify the injustices that harm people trapped in conflict. Instead, she holds out hope that people will simply remember the stories.

“What I do hope is that if you remember anything I said or any of my stories tomorrow morning over breakfast, if you can remember the story of Sarajevo or the story of Rwanda, then I’ve done my job,” she said previously.