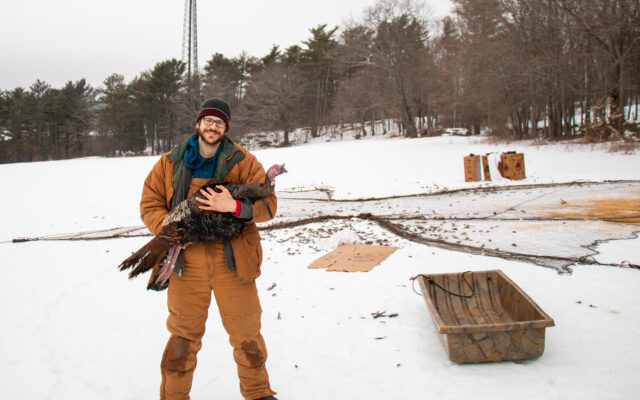 Contributed News • January 18, 2023
Wild turkeys have fewer resources available during Maine winters, so they will adjust their movements in inclement winter weather to increase their odds of survival, but their behaviors may change as the climate continues to warm, according to a University of Maine study.

Wild turkeys have fewer resources available during Maine winters, so they will adjust their movements in inclement winter weather to increase their odds of survival, but their behaviors may change as the climate continues to warm, according to a University of Maine study.

Wild turkeys were historically extirpated from Maine, but thanks to conservation efforts beginning in the 1970s, wild turkey populations have now been restored and are present in every county. At their northern range limit in Maine, wintering turkeys generally face extreme low temperatures and scarce resources. Turkeys adjust their movements — for example, the locations where they roost at night — in order to increase their chances of surviving the tough Maine winters.

Understanding how species behave in their northernmost habitats is increasingly important with a changing world. The warming climate may expand the northern boundaries of a species’ range, but is also linked to the heightened magnitude and occurrence of extreme weather events that impact an animal’s chance of survival.

A team of UMaine researchers partnered with the Maine Department of Inland Fisheries and Wildlife to study how wild turkeys moderate their movement in Maine over the course of the winter. They deployed GPS transmitters on 59 wild turkeys captured at baited sites between 2018 and 2020. The turkeys were observed over all types of landscapes, including commercial forests, residential areas and agricultural lands. The scientists compared how the wild turkeys transitioned between movement states — stationary, mobile and roosting — according to local weather, considering variables like snow depth and temperature.

The data showed that wild turkeys altered their movement in subtle, context-specific ways, depending on different weather variables. For example, turkeys were more likely to spend time in a stationary state when temperatures were colder and snow was deeper. When stationary and roosting, turkeys selected conifer forests and avoided land covers associated with foraging, such as agriculture and residential areas; this was especially true during poor weather.

“Our results emphasize how winter severity is a limiting factor for turkey populations in Maine, but also how turkeys have adapted to survive these harsh conditions. By being flexible about when and where they move, turkeys can conserve energy when weather is bad and take advantage of resources as they become available. As winter’s get shorter and warmer, we could see these pressures lessen, which could be good for turkey populations.” says Matthew Gonnerman, who conducted the research for his Ph.D. in the Department of Wildlife, Fisheries, and Conservation Biology at the University of Maine, and is now a postdoctoral researcher at the University of Maryland.

Wild turkeys were found to be flexible in their ability to adapt their movements to the changing winter weather conditions. The results will inform wild turkey conservation efforts in light of climate change, and may provide a model for how the same can be done for other species. For example, wild turkey populations will need habitats with adequate shelter to protect them in times of inclement weather as the warming climate continues to expand the upper boundaries of their range.

“Thanks to conservation efforts, wild turkey populations are doing really well in Maine. Our work suggests part of their success relates to their flexibility in dealing with our long Maine winters,” says Erik Blomberg, associate professor of wildlife population ecology in the UMaine Department of Wildlife, Fisheries, and Conservation Biology. “As climate change continues to alter winter conditions in Maine, it’s going to be very interesting to continue tracking turkey populations and their response.”

The study was published September 2022 in the journal Ecological Applications. Additional collaborators include Pauline Kammath, associate professor of animal health in the School of Food and Agriculture; Stephanie Shea, who completed her Ph.D. in ecology and environmental sciences; Kaj Overturf, who completed his bachelor’s degree in the Department of Wildlife, Fisheries, and Conservation Biology and the Honors College; and Kelsey Sullivan, biologist with the Maine Department of Inland Fisheries and Wildlife.